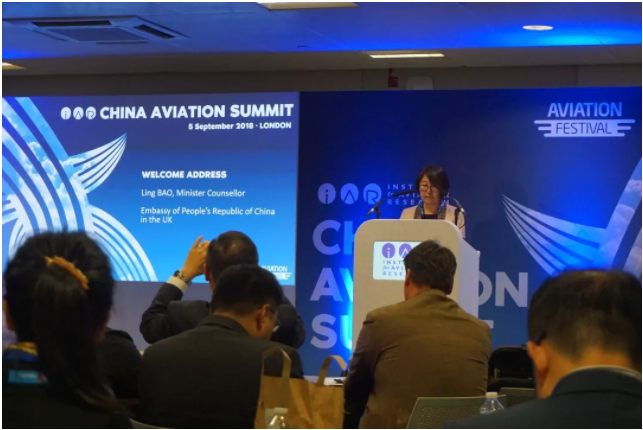 (Original speech was made in Chinese, following notes was translated by IAR)
Ladies and gentlemen,
Good afternoon!
I am very delighted to be invited to the China Aviation Summit in 15th World Aviation Festival.
The World Aviation Festival is a distinguished gathering of aviation industry. There are more than 3,000 representatives of aviation industry attending the festival this year, which makes the festival also an unprecedentedly grand occasion. As an important part of the festival, the China Aviation Summit was hosted by Institute of Aviation Research (IAR). The summit focuses on Chinese travel and aviation market, and aims to discuss the future trend and share the opportunities in rapid developing with all the world. This year is the fortieth anniversary of China's reform and opening, also the fifth year of the Belt and Road Initiative. China has entered upon a new historical stage, China Aviation will meet new historical opportunities for developing.
Firstly, it’s the opportunity of the Belt and Road Initiative. The Belt and Road Initiative is a significant measure of opening-up, and the extensive platform of international cooperation under the tide of globalization. To further facilitate the bilateral interaction and promote connectivity is the most important content of the Belt and Road Initiative. With the encouragement of the Belt and Road Initiative, Chinese Civil  Aviation companies are pushing forward the construction of infrastructure and developing international transport market to realize the promotion of connectivity of all aspects.
Secondly, it’s the opportunity of opening-up of the market. Chairman Xi stately announced to the whole world in this year’s Boao Forum for Asia that the gate of opening-up of China will be opened up gradually. China has recently released the Special Administrative Measures for Foreign Investment Access in 2018, in which says further liberalizing the  market access of manufacturing industry, canceling the investment percentage restriction of foreign investors in trunk route aircraft, reginal route aircraft, general aviation aircraft, helicopter, unmanned aerial vehicle, aerostat and other types of aircraft. All the measure will help China Aviation Industry integrate into global aviation industry chain, and bring more developing chance for global aviation industry.
Thirdly, it’s the opportunity of the tighter tie between China and the world. With the opening-up of China and the development of Chinese people’s living condition, the connection between China and the world is getting tighter and tighter, which bring great business opportunities for long-haul transportation like international aviation. The data shows in 2017 the number of traveler left the country is 598 million, which is an 4.76% increase compared with the year before. The bilateral economic tie between UK and China is tight, and the personnel exchange is frequent, which provides a wide market for civil aviation. According to the data of UK department of tourism, the number of Chinese traveler to UK in 2017 is 337 thousand. The number hits the historic peak ever since, and shows an 29% increase compared with 2016. The total spending of Chinese travelers in UK is 900 million dollar in 2017, a 35% increase compared to the year before. China and UK are seizing the historic opportunity, we have decided to increase direct flight by 50% and increase the aviation capacity to 150 flights weekly in the ninth UK-China economic and financial dialogue. Since 2018, Chinese airlines have opened 5 new routes from different Chinese cities to UK. What’s more, China and UK also set up an aviation cooperation group to strengthen the aviation industry, which laid a solid foundation for two countries’ cooperation.
The opportunities Chinese Aviation facing now if not only opportunities for China but also the opportunities for the whole world. The old saying goes in China that it is much joyful to share the joy with others than just enjoy the joy alone; Chairman Xi said a single flower does not make spring, while one hundred flowers in full blossom bring spring to the garden. Harmony in diversity and win-win cooperation are the wisdom of Chinese tradition for thousands of year, and it’s also useful experience confirmed in the process of reform and open in China. Though there may be countries prefer zero-sum game, China is and will be always open-up to the world, share opportunities with the world, seek common development. I hope more international aviation practitioners can recognize opportunities of China, seize opportunities of China, and cooperate with China, to serve the economical development and the demand of people, to get win-win situation, to seek common development through this summit!
Finally, wish great success for China Aviation Summit!
分享到：
上一篇IAR and CAPSE jontly presented China Travel Awards in China Aviation Summit
下一篇The 2019 International Transport Modelling Workshop was successfully held from 8 to11 Jan
下一篇The 2019 International Transport Modelling Workshop was successfully held from 8 to11 Jan
推荐精彩博文