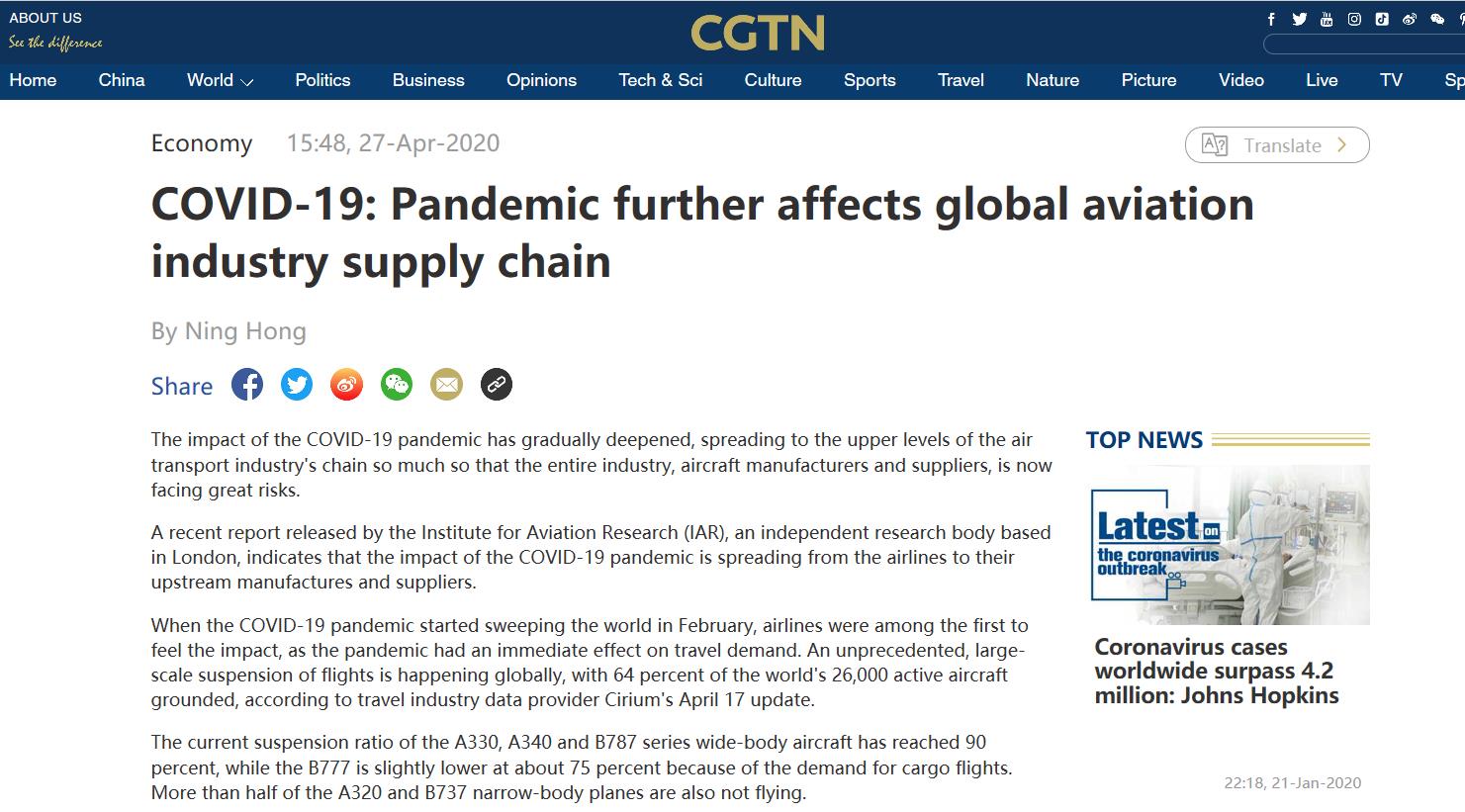 The impact of the COVID-19 pandemic has gradually deepened, spreading to the upper levels of the air transport industry's chain so much so that the entire industry, aircraft manufacturers and suppliers, is now facing great risks.
A recent report released by the Institute for Aviation Research (IAR), an independent research body based in London, indicates that the impact of the COVID-19 pandemic is spreading from the airlines to their upstream manufactures and suppliers.
When the COVID-19 pandemic started sweeping the world in February, airlines were among the first to feel the impact, as the pandemic had an immediate effect on travel demand. An unprecedented, large-scale suspension of flights is happening globally, with 64 percent of the world's 26,000 active aircraft grounded, according to travel industry data provider Cirium's April 17 update.
The current suspension ratio of the A330, A340 and B787 series wide-body aircraft has reached 90 percent, while the B777 is slightly lower at about 75 percent because of the demand for cargo flights. More than half of the A320 and B737 narrow-body planes are also not flying.
Over the years, aircraft manufacturers and suppliers in the upper stream of the aviation industry chain were unlikely to be affected by the ups and downs of downstream industries because of the high technical barriers, lower competition intensity and many years in the position of being a monopoly or oligopoly. But the COVID-19 outbreak has dealt a massive blow to the demand side of air transport, making it difficult for upstream aircraft manufacturers and suppliers to avoid the impact.
One of the latest examples took place on April 25 when Boeing canceled a 4.2 billion U.S. dollar deal to buy the commercial aircraft division of Embraer. It drew an angry response from the airline industry and scuttled plans to build a U.S.-Brazil alliance, covering regional jets to large aircraft.
This comes after a series of hits at Boeing since the 737max incidents in 2019. In the first quarter of 2020, orders for 196 planes were canceled, which included 192 B737Max series, four B787 and one B777, which does not include the 160 orders that were removed from the list because of the new revenue recognition standard, ASC 606.
Boeing's major competitor, Airbus, is also in an uneasy position. The company has canceled its original production and delivery plans for 2020, and according to Sandy Morris, an aviation analyst at Jefferies, the annual deliveries of Airbus aircraft may drop to 650 in 2020, and even down to 600 in 2021.
Guillaume Faury, Airbus's chief executive, said there was too much uncertainty about the crisis and that the situation could get better in 2021, but he remained uncertain when capacity would be fully restored. At present, Airbus's French and Spanish plants have partially resumed operation.
As a major provider of airplane engines, Rolls-Royce has announced it will abandon its profit targets, delivery targets and cash reserve targets for this year and stop shareholder dividends. It was Rolls-Royce's first cancellation of shareholder dividends since it was privatized in 1987, a move that means it is predicting a sharp fall in future revenues.
GE is facing the same pressure as its close business partner Boeing. The suspension of the 737Max has cost GE around 1.4 billion U.S. dollars. And the impact of COVID-19 is certainly bigger than that. The company has overturned its earlier prediction in March about first-quarter losses and decided to cancel this year's financial forecast. In March, GE announced that it will lay off around 2,500 employees, 10 percent of the staff of its U.S. aviation business. It is likely to become the first manufacturing enterprise to implement mass lay-offs because of the pandemic.
Efforts to rescue the aviation market are underway. French Economy and Finance Minister Bruno Le Maire told the media that the French government will provide a historic 7 billion euro loan to Air France. This includes 4 billion euros in government-guaranteed bank loans and 3 billion euros in direct government loans. Le Maire said the French government would always support Air France.
Benjamin Smith, chief executive of Air France-KLM, Europe's largest airline group, told French media on April 25 that business would not return to normal in the next two years because of the global outbreak of COVID-19. Air France's business was only two to three percent of its normal business in April, the report showed.
The U.S. Treasury Department said on April 25 that it had distributed an additional 9.5 billion U.S. dollars to the aviation sector through the Payroll Assistance Program, bringing its total aid to the U.S. aviation industry to 12.4 billion U.S. dollars.
In China, the latest data from the Civil Aviation Administration of China (CAAC) shows that civil aviation transport began to resume in late February. The average daily passenger traffic for civil aviation in March was 458.3 million, an increase of 69.8 percent over February.
Original link: https://news.cgtn.com/news/2020-04-27/Pandemic-further-affects-global-aviation-industry-supply-chain-Q1Ml7w1BXa/index.html
分享到：
上一篇Airbus, Boeing & Entire Supply Chain Are Threatened By Deepened Pandemic Impacts
下一篇Virgin Australia, Why Won't The Aussie Government Rescue The Country's Second Largest Airline?
下一篇Virgin Australia, Why Won't The Aussie Government Rescue The Country's Second Largest Airline?
推荐精彩博文